My wife and I got back a couple of weeks ago from a 2 1/1 week trip to Rome and Ravenna. I'd like to share some of the watercolors I did while there.
I wasn't as prolific as I would have liked. Jet lag, Roman congestion, and a very bad cold conspired to slow me down.
Nonetheless, here they are.

Ponte Sant'Angelo
We stayed in an apartment near the Ponte Sant'Angelo. So the first couple of mornings I just sauntered over. I find the angels on the bridge irresistible, and also not too complicated for a jet lagged brain. 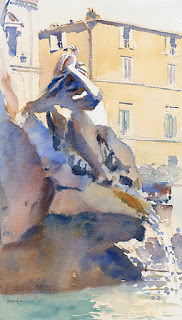 Fontana dei Quattro Fiume
On the third morning I decided to try something a bit more complex. On a 1993 trip to Rome, I painted this view of Bernini''s Fontana dei Quattro Fiume in the Piazza Navona. So I decided to try it again.
It's a nice composition. It was in complete shadow when I started at around 8:30. But when I started to paint after doing my line work the sun was beginning to hit it.
I work from top to bottom. By the time I reached the bottom, I was craning my neck to see around all of the tour groups who had arrived by 10:00. That, coupled with my waning concentration, left the water at the bottom somewhat unresolved. 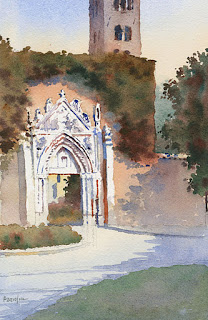 San Giovanni Evangelista
After a week in Rome, we took the train to Ravenna. We love the town. Not only does it have great Byzantine mosaics, but it is a very livable city. Everyone rides bikes, and it is very calm and enjoyable.
However I was in the depths of my cold, so the first morning I chose this church entrance near our hotel. I painted this same view in 2006, so I felt I could handle it.

Santa Maria in Porto
By the second day in Ravenna, I was feeling better. The city provides free bikes for tourists so we rode out to Classe to see one of the Byzantine churches. When riding back, we passed through a park. As we passed this church, I decided I had to paint it. The backlit lighting pattern was irresistible.

Santa Maria del Suffragio
This church is on the main square the Piazza del Popolo. We walked by it many times, and it always caught my eye. So I found a nice shady spot one afternoon and painted it. I usually try to avoid fully architectural subjects (my inner architect gets in the way). But I had fun, especially with the background building. 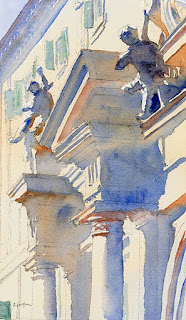 Santa Cecilia
Back in Rome, Jill had visited this church the previous week while I was bedridden. She gave it five stars as a painting site, so I went over to Trastevere. There is a nice fountain in the courtyard, but it was completely in shade. So I sat in the parking area in front (as cars arrived they gave me quizzical looks but still parked around me). But I loved these flying puti. So Baroque. 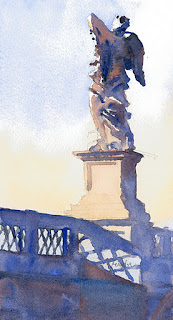 Angelo
One late afternoon we had returned to the apartment after a day of exploring old churches. I'm a morning person and usually the temperature and humidity in the morning helps me in my wet-in-wet ways. But I made an exception and went over to my favorite bridge to paint just as the sun was getting lower in the sky. The lighting was fantastic, but the paint didn't really flow. But looking back on it, it isn't so bad. 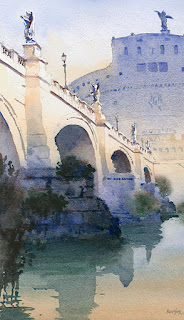 Ponte Sant'Angelo
By this time I was feeling much better, so took on the bridge from underneath, a tricky perspective. I also had to try to deal with the Castel Sant'Angelo in the background. I decided to put it in shadow. A couple of Romans walked by and asked why the Castel was blue (it is a brick red brown).

Fontana di Nettuno
On our last day I decided to venture over to the Piazza Navona again. This time I went very early and chose one of the less popular Bernini fountains, the Fontana de Nettuno. I had many admiring tourists nonetheless (why do they have to stand in front of you and talk to you :)).
There was a very nice Spanish 8 year old who watched me quietly for 45 minutes. Sweet.
This painting flowed very nicely. The weather had cooled and it was threatening rain. The cool humidity helped the washes flow and intermingle the way I like to paint.
Posted by Michael Reardon at 3:05 PM 4 comments: 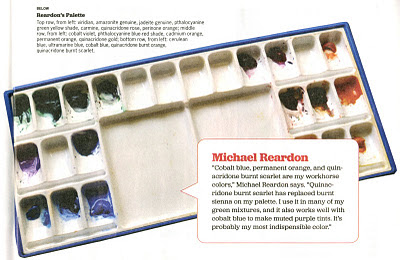 I just got back from vacation to find my palette featured in the 25th anniversary edition of Watercolor magazine.
My palette is one of nine featured in the article. I find it fascinating to see the colors others use.
In fact they cropped out the other half of my palette. Below what you see here is a large mixing area. It closes and seals the paint in, keeping it moist. I did discover the disadvantage of this while on vacation. If you store it upside down, the moist paints make a real mess. I'm sure you can still see the permanent orange and cobalt blue that I scraped out along the Tiber in Rome.
Posted by Michael Reardon at 11:47 AM 11 comments: