I received a couple of requests to print these larger. So here they are.

Dockside at the Posada

We spend a week near Santiago, at a posada at the edge of Lake Atitlan. This was a quick painting trying to show the mist on the mountains on the distance. It was a bit of a struggle, but in the end I was pleased. This was our view while sipping a Moza, the local dark beer. 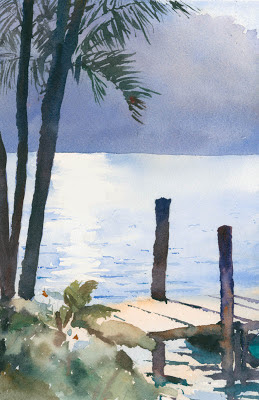 Same viewpoint as above, only looking a bit to the left. 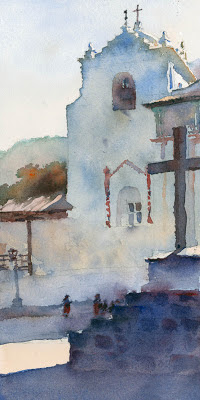 The Church of Santiago Atitlan

This painting was a bit of a struggle. Architectural subjects sometimes slow me down. But the most striking part of this was I was often surrounded by school children. It was the first day of the semester, and about halfway through school must have left out. Cultural boundaries are tighter there, and some times I could hardly move my brush because of the crush. I was kind of crunchy by the end, but now I look at the scene and smile. 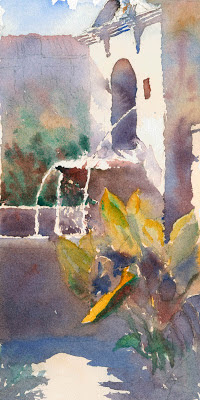 This was the first painting I did, while a bit jet lagged. Our hotel in Antigua, the Quinta de las Flores had a wonderful garden. Though a bit foggy-headed, I couldn't resist the fountain 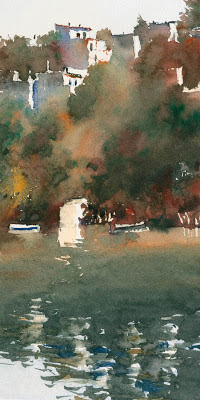 A couple of hundred yards from our posada in Santiago was the village lavanderia. The following three paintings were all from the same area. I didn't include the women washing (although if you look above those white figures are women washing clothes) because it seemed a bit invasive. But the setting was quite pleasant and a peaceful place to paint. After three days, even some of the kids knew me. 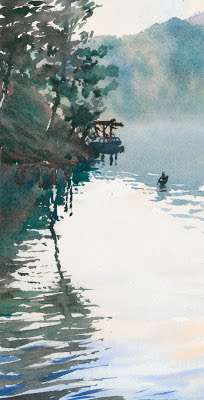 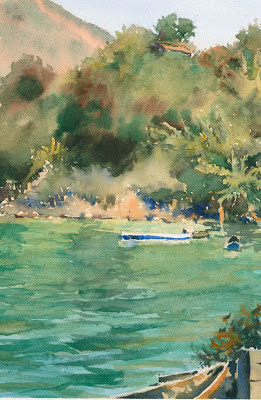 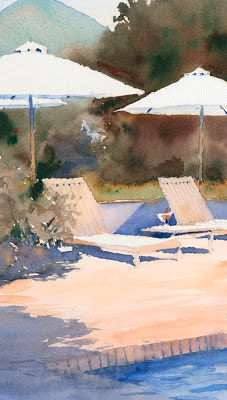 Poolside at the Quinta

This was the final painting, again from the Quinta de las Flores. Overall, a great trip. 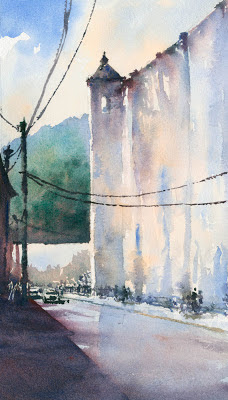 This was just outside of the Quinta in Antigua. I lasted about fifteen minutes out there. There was so much traffic, including buses spewing diesel fumes, that I had to finish it inside. As a result I forgot to add some windows on the church, but overall it gave the feeling of the street.
Posted by Michael Reardon at 8:36 PM 12 comments: 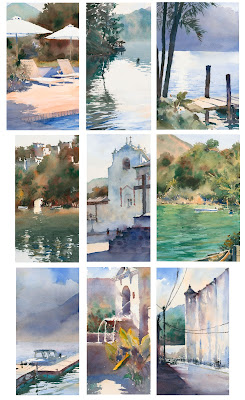 Here are the nine paintings I got done during my recent two week trip to Guatemala. I used my new Escoda number 12 nylon brush for all of these. It was a bit of a challenge doing large washes. The nylon just doesn't hold a lot of pigment and water. Next time I'll bring a mop.
Posted by Michael Reardon at 4:18 PM 4 comments: