Last week I participated in the Sonoma Plein Air event. This was my fourth year. I always find a week of painting outdoors both exhilarating and exhausting. It is also inspiring painting with 35 or so great artists for an entire week.
This year, unlike the previous three rainy years, featured near 100 degree temperatures the first three days. For watercolorists, this is the worst of all weather. As I tell my students, there is a reason the Navajos do sand paintings, and the British do watercolors. The hot weather was like someone holding a hair dryer while trying to paint. The washes dried very fast. During those days I had a water spray bottle in my right hand, spraying constantly in an attempt to keep the washes moist. It wasn't a bad technique, once you got the hang of it.
This is the only plein air event I do. The proceeds benefit art programs in the Sonoma Valley schools, which makes it feel extra worthwhile. The organizers treat the painters very well, and do a remarkable job every year. One great service they provide is housing for the painters. My hosts were wonderful, and their cottage provided welcome refuge from the heat (it was air-conditioned).
I did eleven paintings during the week, some better than the others. So here they are, with a bit of commentary to better explain them. 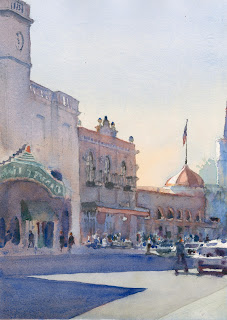 This is my first effort, starting right after registration on Monday morning at around 10:30. Perhaps a bit too ambitious for a first go. This view is the quintessential landmark Sonoma street view, spanning the Sebastiani Theatre and the church.
I started out on the sidewalk, but soon retreated into the shade nearby as the temperatures started to go up. I started using the water spray bottle for the first time, which went well. I also used my new Best Brella for the first time, which helped to keep the light even on the paper. The umbrella also proved to be indispensable the next few days.
I was quite disappointed when done, feeling it a bit overworked. However, it was the first to sell on Saturday, even before the exhibit started. The buyer let it stay up all day, and I could have sold it many more times that day. I'm often the worst judge of my work. 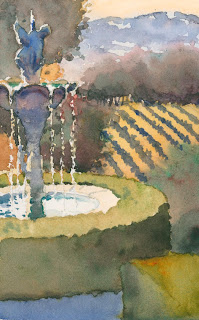 After checking in with my hosts, and cooling off in their air-conditioned cottage, I went out to Bartholomew Park and did a familiar subject. I've done this fountain a couple of times before.
One thing I did this time is review some of my failed paintings from previous years before leaving. This was one of the problematic paintings. Usually the problem was composition. So, like with this one, I did an overlay and thought more carefully about the composition. The main change here was cropping on the left so the whole fountain wasn't shown. This is something I learned while in Paris painting fountains a few years ago. Less is more. Leaving something to the imagination is always worthwhile. I also cropped the foreground and changed the shape of the tree behind the fountain so it didn't silhouette the entire fountain, allowing a break for the eye to travel into the picture. 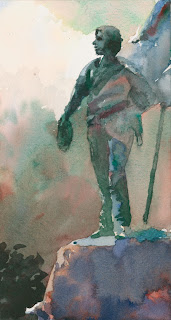 This one is a reprise of a painting I did last year. The main difference is that I cropped the flag on the right, placing the subject on the right side of the frame. Last time, his hat was the focal point. This time I more strongly featured his head.
Temperature on Monday afternoon: 104 degrees. Lots of water spraying. 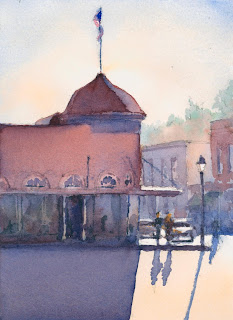 This corner store is one of the best known Sonoma Landmarks. I chose to go out there at around 7 AM, before the heat. I really like backlit subjects. It simplifies the number of shapes. If the silhouette is interesting, that shape can make the painting. Interestingly enough, this little guy took me almost two hours, mainly due to the fact that the washes were very slow in drying. 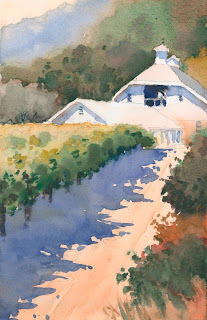 Slow drying was not the case with this one, which I started about 11 AM. The heat plus a slight wind made it feel like someone was holding a hair dryer on the painting. As a result, this one took about 45 minutes.
I have painted this barn before. This time I cropped the right side of the barn, again to allow the eye an entry point and leave something to the imagination.
After a wonderful lunch at Jack London State Park, I went back to my cottage to cool off. Later that afternoon was the Quick Draw event, where we complete a painting between 4 and 6:30.
I did the same view as last year, a close up of the Plaza fountain. Again, I cropped this year's version. Unlike last year, it sold quickly. Unfortunately, I didn't get a scan of it.

This my sixth version of this view. It was the first view I painted at my first Sonoma Plein Air four years ago. I started this one at 7 AM when the air was a bit cooler. It went pretty smoothly. I always try something a bit different. It doesn't show so well in this scan but the sky has been grayed a bit with cobalt blue, unlike the pure orange sky I have used before. It's tricky to get that feeling of sunrise in a sky. I'll have to keep working on it.

This is also one of my favorite views, which I've done before. I incorporated one of the lessons I teach my students to include different value ranges for the foreground, mid-ground, and background. In this case I made the mountain on the left a much different value range than the mid-ground. This creates a nice sense of depth in an otherwise flat composition.
I started this at 11 AM and it was already over 90 degrees. The water spray bottle was going constantly (see the spots in the upper shadow on the building). 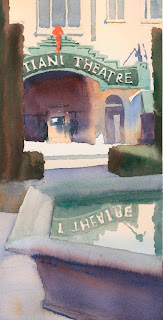 When painting this fountain during the Quick Draw, I noticed they turned off the fountain, so the still water reflected the Sebastiani Theatre sign. I'm not happy with the composition, so I'll have to try this one again. There is a lack of connection between the foreground and the rest of the painting.
By this point on Wednesday late afternoon the weather had cooled a bit, but the lack of humidity still made wet-in-wet painting a bit tough. 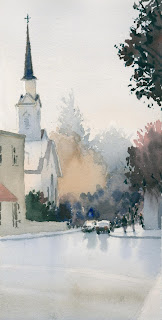 Thursday morning dawned cool and foggy. I was in heaven. I've always been entranced by this view, but never attempted it before.
This one was a lot of fun. I was able to incorporate wet-in-wet painting, which is my favorite. I really like the mix of edges you can get and the "true" character of watercolor you get when you let the colors intermingle on the paper. Because of the fog, I muted my palette with shades of gray. This was undoubtedly my most enjoyable painting of the week. 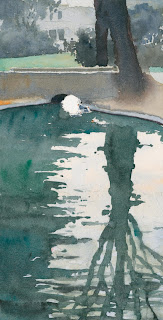 I did this one immediately after the church. Again, it was still foggy and the paint was flowing nicely.
I paint from top to bottom, letting the colors intermingle using gravity pull them down. Just as I finished the bridge and was ready to move into the water, the jets started and ruined the reflection I was about to do. Although I had a sketch, I had to rely on my memory, which was mostly unsuccessful. This is another one I'll have to try again. Reflections are very tricky to do well. They have to be done quickly and decisively. Without them, I think you can see some of the uncertainty on my part.
After another nice lunch provided by the organizers, I headed home to Oakland to begin framing everything. On Friday night, there was a gala dinner and silent auction. John Lasseter provided his new Train Barn for the festivities. My painting of the Sonoma Plaza Fountain was purchased by Mr. Lasseter, so that was a good start. 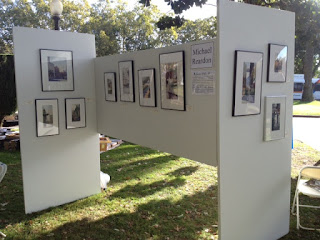 On Saturday morning all of the artists hang their work in the Plaza. From 10-4 you are on to discuss your work, answer questions, and even sell the work. I was fortunate to have 7 of my 11 paintings sell. Selling isn't my focus, but it doesn't hurt either, especially when you know that 40% go to art programs in the Sonoma schools.
After the event, I drove home and crashed (not literally). 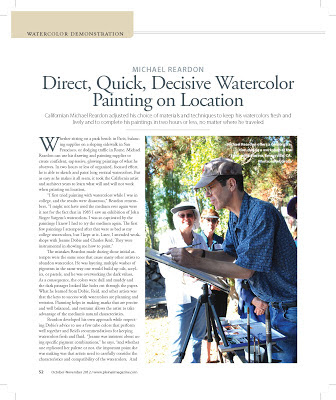 Sorry I haven't been posting much lately. September was a blur of commissioned work, and October started out with a week at Sonoma Plein Air. But October was also greeted with a feature article on my work in Plein Air magazine. Steve Doherty wrote a very nice article, concentrating (naturally) on my plein air work. If you have a chance, please check it out. The photo is from my demonstration for the California Watercolor Association workshop in July.
A post on the work from Sonoma is coming soon...
Posted by Michael Reardon at 4:23 PM No comments: