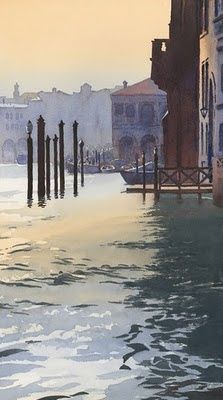 I was recently asked if the painting on the Epperson invitation was mine. In fact it is.
It's a painting I did a few months ago based on a photo I took from a vaporetto while leaving Venice. We were heading to the train station very early one morning and the light was magical.
I haven't worked from a photo in many, many years. So this was an experiment to see if I could ignore a lot of the extraneous information and make a painting that isn't too stiff, a common problem with painting from photos. One thing I did was I used a black and white print. This allowed me to create my own color palette and it was fuzzy enough that I couldn't rely on it for much information aside from some values.
So working from the photo was okay this time. Otherwise this image would never have been painted: the viewpoint is essentially impossible, since it was from a moving vaporetto, and the quality of light only lasted about another 15 minutes.
Posted by Michael Reardon at 6:58 PM